Book of the Month: Swimmy 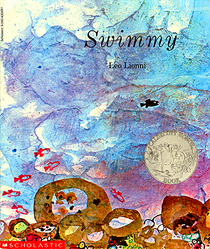 Swimmy is a children’s book written by Leo Lionni about a lone black fish named Swimmy who finds new sea creature friends after his school of red fish friends is eaten by a big, scary tuna fish. This story fits with September’s theme of friendship because Swimmy’s journey is about finding new friends when old ones are gone. It’s not that Swimmy isn’t liked – Swimmy’s friends are swallowed! But the resilient black fish manages to find new underwater buddies after searching the sea alone. With these new fish, Swimmy devises a plan to all swim together like one big fish, with Swimmy acting as the “eye”. They succeed in scaring away the big tuna. END_OF_DOCUMENT_TOKEN_TO_BE_REPLACED

Book of the Month: Jared’s Cool Out Space 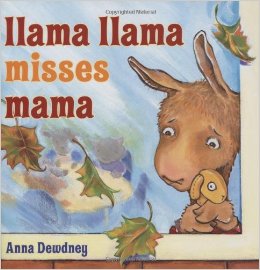 Llama Llama Misses Mama, written and illustrated by Anna Dewdney, follows a llama who is anxious about his first day of school. The story has cute pictures and instead of kids going to a regular ‘human’ school, the story has llama students and a zebra teacher. This book has been recommended for kids aged 2 and up. Llama Llama and his mama get ready for school, but when they arrive and he has to say goodbye, he becomes sad and nervous. Llama Llama doesn’t know anybody at llama school and misses his mama. The zebra teacher and other llamas invite him to play some games and try the slide, which makes him feel better. At the end, Llama Llama realizes he not only loves his mama, but school, too! END_OF_DOCUMENT_TOKEN_TO_BE_REPLACED

Book of the Month: On Meadowview Street 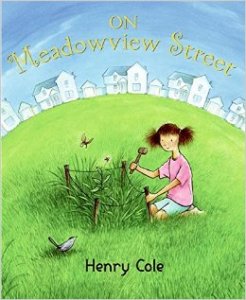 On Meadowview Street is a children’s book written by Henry Cole. This book is about a family who moves to a new suburban home on Meadowview Street, except that there are no meadows to be found. One day, daughter Caroline sees a flower pop up in the grass, so she decides to build a “wildflower reserve” around it. Soon, more flowers and insects appear and the reserve grows bigger. Caroline’s parents put their lawnmower up for sale, plant a tree, and even build a mini pond in their yard. By the end of the story, neighbours on Meadowview Street follow suit and soon enough, the whole street lives up to its name. END_OF_DOCUMENT_TOKEN_TO_BE_REPLACED

Book of the Month: Mama Is It Summer Yet? 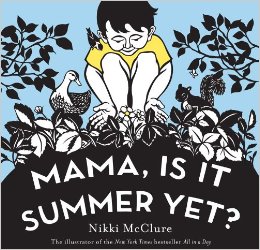 Mama, Is It Summer Yet? is a children’s book about the anticipation of summertime, written and illustrated by Nikki McClure. The story follows a mother and her son, who asks many times if it’s summer yet. The boy asks this each passing day as leaves return to the trees, flowers start to blossom, and the cold of winter fades away. In anticipation of summertime, the boy and his mother build a fort and start planting seeds in their garden. When summer finally arrives, the pair sit under a tree on a sunny day and eat some fruit. The story ends here, with summer arriving as a kind of reward for the boy’s patience and anticipation. END_OF_DOCUMENT_TOKEN_TO_BE_REPLACED 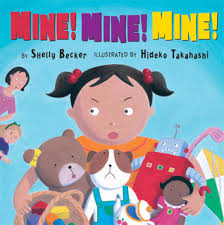 Mine! Mine! Mine! is a children’s story by Shelly Becker about a girl named Gail who doesn’t like to share. The illustrations by Hideko Takahashi are bright and have soft lines too, which makes it visually appealing. The story fits well with our monthly theme of childcare because it follows Gail as she learns how to share with her cousin Claire. Learning to share doesn’t come easy for Gail. When Claire starts playing with Gail’s teddy bear and tea set, Gail gets angry and takes the toys away. When Gail’s mom explains to Gail the importance of sharing toys with others, the story takes a funny turn as Gail decides to share old, dirty things she doesn’t care about. Gail’s mom notices this sneaky move and teaches Gail that to become a “pro” at sharing, you have to share some things you hold dearly. END_OF_DOCUMENT_TOKEN_TO_BE_REPLACED 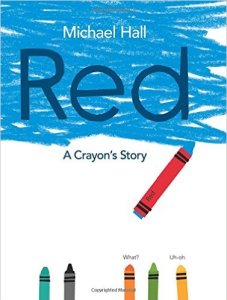 Red: A Crayon’s Story is an insightful story by Michael Hall. It’s about a red crayon that can only colour in blue. Other crayons ask the red crayon to help them with drawing strawberries, cherries, and other red things, but they all turn out blue. The red crayon feels a sort of identity crisis because as much as it tries, its intentions don’t match its outputs. That is, until the end of the story, when a berry coloured crayon asks the red crayon to draw a blue ocean. By the end, the red crayon realizes and accepts it can be itself, and that’s perfectly okay. END_OF_DOCUMENT_TOKEN_TO_BE_REPLACED

Book of the Month: Oh Say Can You Seed 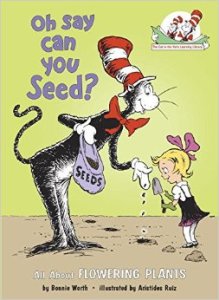 Oh Say Can You Seed? is a fun, rhyming children’s book written by Bonnie Worth and illustrated by Aristides Ruiz. This book illustrates the fundamentals of how seeds grow into plants, and the fruits and vegetables that we eat every day with bright pictures and a rhyming structure. Kids will recognize popular characters in the story: The Cat in the Hat, and Thing 1 and Thing 2 created by Dr. Seuss. This book is a great fit for March’s theme of Spring Science, because with the cold weather tapering off comes the opportunity to start planting veggies or flowers for your home or garden as summer nears! END_OF_DOCUMENT_TOKEN_TO_BE_REPLACED

Book of the Month: A Perfectly Messed Up Story 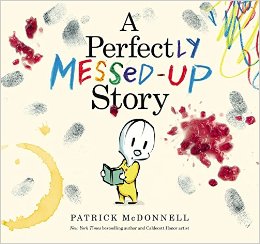 A Perfectly Messed-Up Story is a children’s book written by Patrick McDonnell. This book tracks the story of Louie, a young boy in pajamas. Except that his story is interrupted when splotches of jam, peanut butter, crayon marks, and more clutter the pages and ruin his storytelling. Louie becomes upset and decides he’s not going to tell his story anymore: “Who would eat a jelly sandwich while reading MY book?” END_OF_DOCUMENT_TOKEN_TO_BE_REPLACED

Book of the Month: Jared’s Cool Out Space 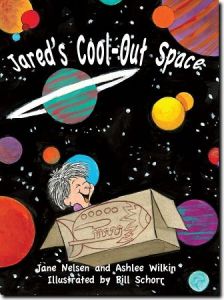 Jared’s Cool-Out Space is a children’s book that illustrates concepts relating to positive discipline. Positive discipline involves a set of parental techniques that include validating your child’s feelings, asking your child what they can do to relax when they are feeling bothered, and how to create a safe and positive space where they can go to feel better and then, by natural extension, “do” better.

END_OF_DOCUMENT_TOKEN_TO_BE_REPLACED