Let’s Talk About Saying No 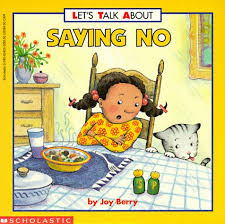 Let’s Talk About Saying No is a book written by Joy Berry about when to say no, and when not to. The book is accompanied by bright illustrations, and the topic is presented by a cat named Casper, which makes the topic lighter and fun to look at. Casper the cat talks about a bunch of situations where Tonya, the girl in the story, should say no, and other times when she shouldn’t. For example, Tonya learns that she should say no when someone asks her to do something she knows she shouldn’t, like taking cookies from the cookie jar when she is not allowed. She also learns that she shouldn’t say no when someone asks her to do something she should, such as when her mother asks her to go to bed because it’s late and she has school the next day. There are many other examples in the book that get this basic idea across.

This book is great because it talks about an important concept that children learn as they grow up, but presents it in simple writing that isn’t preachy. Joy Berry has written other stories in the Let’s Talk About series, such as Let’s Talk About Feeling Angry, Let’s Talk About Being Helpful, and others.

Most of the pages in the book give a scenario where Tonya should (or should not) say “No.” You can use this opportunity to ask your own child why or why not Tonya should say no, and what they think about that. You could also ask your child what they might say if if were them in the situation. Would you say no in this picture? Does the reason make sense? Does it sound fair? Why or why not? If you were in Tonya’s shoes, how would you feel about it?

Hopefully this will be a rewarding experience for your child, not just because they will understand some new rules, but will know why. Sometimes kids learn what they should or shouldn’t do because they are simply told so, but they may not know why. This book provides parents with an invaluable opportunity to explain the scenarios presented on each of the pages.

Click Here to search for the title in Vancouver public libraries.

If you’re interested in the Let’s Talk About series, Joy Berry has published many other stories in the series that you might like, some of which are available in Vancouver public libraries. Click Here to see more.